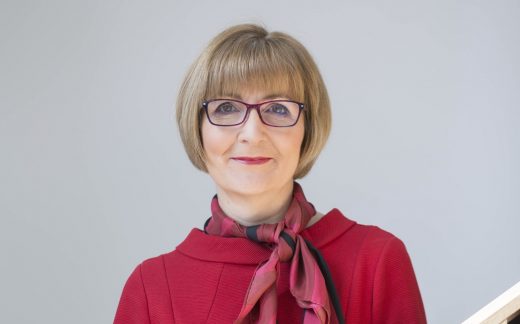 Maggie did her BSc degree in Cell Biology at the University of Glasgow. Her PhD at the University of Liverpool was a Tate & Lyle CASE award where she studied the sweetest substance known which, surprisingly, is a protein called thaumatin. Protein research then brought her to Geosciences at the University of Glasgow where, as a NERC PDRA, she investigated proteins in brachiopod shells. As a Royal Society University Research Fellow, Maggie collaborated with Sir Alwyn Williams for many years, establishing her enthusiasm for biominerals. As well as research and teaching commitments at the University of Glasgow she held several leadership roles including Associate Dean for the Faculty of Physical Sciences Graduate School, International Lead for the College of Science & Engineering and Head of School of Geographical & Earth Sciences.

As Professor of Biomineralisation, Maggie’s research interests are broad and multi-disciplinary. These interests include extracting environmental information from shells and corals using isotopes and trace elements and determining how shells of economically important species such as mussels, will be affected by environmental change including ocean acidification.

In 2017 Maggie joined the University of Stirling as Dean of the Faculty of Natural Sciences. The Faculty comprises the Institute of Aquaculture, Divisions of Biological & Environmental Science, Computing Science & Maths and Psychology. In 2018, she completed the Senior Executive Programme of the London Business School. She holds several external roles including being a member of the Scottish Government STEM Strategy Advisory Group, Chair of the Learned Societies Group (LSG), member of the Royal Society Partnership Grants Committee and the Carnegie Trust PhD committee.  She recently completed a 3-year term as Vice-President (Physical Sciences) of the Royal Society of Edinburgh. She is the interdisciplinary advisor of REF sub-panel B7 (Earth Systems and Environmental Science) in criteria-setting and assessment phases.

On 1st January 2021, as Munster Technology University was founded, Maggie took up the role of Inaugural President of MTU.